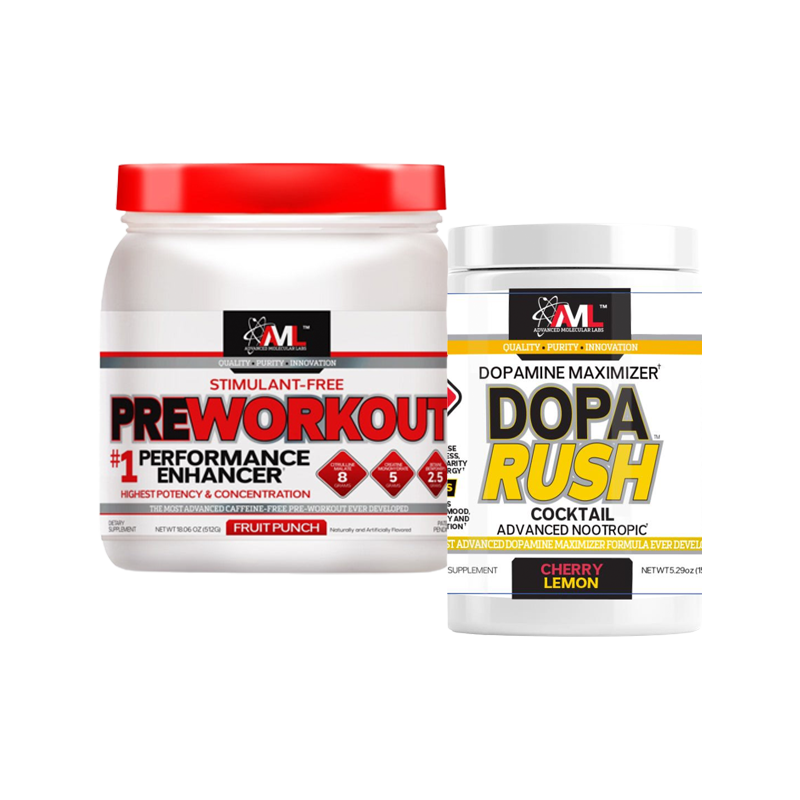 Dopa Rush:
Dopa Rush is your solution for a weary CNS. Dopa Rush™ is a dopamine MAXIMIZER that increases mental alertness, focus, clarity and energy! No crash, no jitters- just enhanced mood, creativity and motivation.*

why it works
STIM-FREE PREWORKOUT: Intensifies performance without stimulants. A primary contributor to pre-workout fatigue is a weary central nervous system (CNS) that requires more than just energy from food to get you going. Fortunately, AML has discovered a unique blend of compounds that conquers CNS fatigue by reestablishing the required levels of the correct neurotransmitters to restore focus and motivation needed for intense training.
DOPARUSH: Restoring optimal CNS function starts with boosting dopamine levels. Doing so reduces fatigue and increases focus, yielding superior mental and physical performance wherever you are! Increasing dopamine levels is great, but it's also important to restore and balance other vital neurotransmitters, including epinephrine, nor adrenaline, etc., for superior CNS function. Dopa Rush™ uses a scientifically backed formula to crush fatigue, while simultaneously improving mood and cognitive function.

STIM-FREE WORKOUT: Since reduced dopamine levels within the CNS decrease motivation and performance while inducing fatigue, novel ways to increase dopamine production before your workout should boost exercise performance. The consumption of the dopamine precursor tyrosine was recently shown to provide this benefit in a double-blind study, confirming that tyrosine consumption influences the ability to tolerate prolonged exercise, conceivably by increasing dopamine levels. AML Preworkout combines tyrosine with folic acid, which may further increase dopamine by increasing tetrahydrobiopterin (BH4) levels. As a co-factor for tyrosine hydroxylase, BH4 facilitates the conversion of tyrosine to L-dopa, which is a precursor to dopamine. The tropical plant mucuna pruriens is also found in AML Preworkout. This ingredient is loaded with the dopamine precursor L-dopa, which has been shown to effectively increase diminished dopamine levels in patients with Parkinson’s disease.

DOPARUSH: Composed of the brain and spinal cord, the CNS is the body’s "processing" center responsible for controlling, coordinating and monitoring all the inner workings of the body as well as its response to external stimuli. Neurons are a fundamental component of the CNS that send and receive electrical signals from the brain. At the nerve ending, these electrical signals are converted into neurotransmitters, which act as chemical messengers to the target synapse at an adjacent neuron. After completing the signal transmission, these neurotransmitters are reabsorbed and degraded, which helps control neuron activity. Increased neuronal activity leads to greater neurotransmitter degradation, depleting their reserves and ultimately leading to CNS fatigue. To "reboot" or refresh your weary CNS, we need to restore and balance the appropriate neurotransmitter levels and that’s where Dopa Rush™ comes in!
Read more >

AML believes in the power of science-driven research and clinical research. We are committed to only working with the best researchers, scientists, physiologists, molecular biologists, biochemists, pharmacists and physicians to produce the very best health, nutritional and performance products possible based on the latest cutting-edge research.
Read more >

THEY CHOSE THE AML LIFESTYLE

Take your results to the next level by stacking your supplements! AML products are designed to work together to help you achieve your fitness goals.